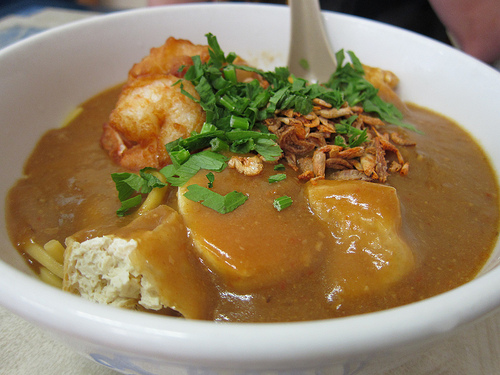 Update: ABC Cafe has closed its doors and I believe a Vietnamese eatery will take its place.

ABC Cafe is situated in the heart of Glen Waverley, on the popular Kingsway street, right next to Petaling Street.

It isn’t a very big eatery, and it doesn’t serve that many people but if you want good Malaysian food for a decent price it’s here.

What differentiates ABC Cafe from the other Malaysian restaurants is that it serves Mee Rebus on the menu. Not very many eateries cook Mee Rebus. As I don’t think it’s as commonly known and I think the many Australian Australians’ just don’t know what it is so restaurants don’t bother serving it and just stick with the Char Kway Teows’, Nasi Gorengs’ etc.

What makes Mee Rebus so good, and ABC Cafe’s is the sauce. The sauce is everything, it is like a viscous soup, and with the noodles, tofu, bean sprouts, prawns and garnish. It just makes a perfect combination. I probably don’t know what an ‘authentic’ Malaysian Mee Rebus is, as I’ve only eaten it a couple of times when I went back but it sure tastes good and that should be all that matters really.

Their Curry Laksa is also no too shabby, it packs the flavour, spiciness and slight creaminess that makes a Laksa appetising. Also, a great Laksa includes both the Hokkien Noodles and Bee Hoon Noodles which ABC Cafe do include.

Portion size is also quite decent, as is with the Mee Rebus.

Their Ice Kacang is also a winner, although it doesn’t have peanuts in there. The flavour and syrups used are just what it should be, just a word of caution even on a cooler day it melts quickly. I think it’s due to their fine ice shavings as opposed to larger ice shavings which seem to stay cooler, longer, and hence hold its form.

I would put the ABC Cafe’s Ice Kacang above Petaling Street and The Grand Tofu’s offerings. It just happens to tick the most boxes when it comes to flavour and the ingredients they used. Definitely like what I had in Malaysia.

I’m pretty happy to dine at ABC Cafe, I’m just not quite sure why it’s not as popular as the other Malaysian restaurants in the same area as some of their dishes taste better then the others.