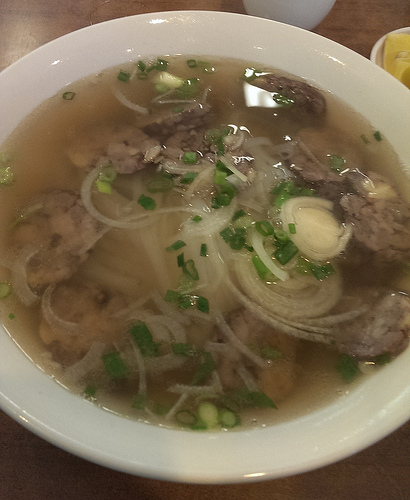 Pho 888 Box Hill on Station Street, is one of the few Vietnamese restaurants in Box Hill. Primarily serving Pho, it does have a small selection of rice dishes and entrees as well. The restaurant is one of your typical Pho joints that you may find on Victoria Street, Richmond or Springvale, how does it compare? Lets see

I ordered the Beef sausage Pho just to try something a bit different (a bit unusual), the soup base lacks a bit of flavour and I also noticed they do not add coriander as a garnish to their soup. That’s not to say the soup was bland, it definitely has a nice flavour to it but compared with the greats in Melbourne, it is just a bit lacking.

The plentiful of onions they add are very strong in taste, probably too much onions for my liking but some might be preferential to their generosity. The beef sausage falls apart very easily, I’m not sure how it’s made because it’s almost like eating mince meat with a bit of pepper balls as seasoning. Not the best sausage I must admit, I think the beef and chicken would actually taste better together.

Finding good Vietnamese food in Box Hill is a challenge, so my opinion on Pho 888 is that it’s sufficient but if you miss great Vietnamese food from places in Richmond and Springvale, or maybe even Footscray, you may be a bit disappointed.