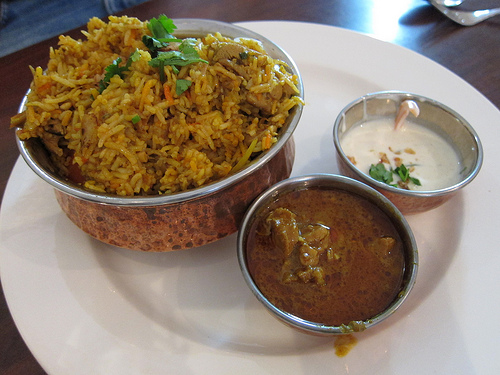 Corlam Kitchen on Blackburn Road in Glen Waverley is one of the better Indian/Malaysian restaurants in the area. Somewhat hidden in the sense it’s away from the Kingsway hub but still situated on a main road so it gets plenty of traffic passing by. My favourite Indian place to eat is and has been for many years, the shop in the derelict Dandenong Hub Arcade food court. Perfect blend of spicy and aromatic spices. Corlam Kitchen, although doesn’t ascend to the top, it does remain in my go to places if I want Indian/Malaysian food around the area. Corlam Kitchen has a wide selection of Rice, Roti and Curry dishes to appease your Indian cuisine cravings

Their Nasi Briyani is rich with flavour, aromatic however the rice served was not as dry as I would have liked. The curry accompaniment adds the creaminess and spices to the dish, and for something to cleanse the pallet a bit it is also served with a yogurt side dish.

You can also order something like Nasi Kandar, selecting a few dishes with rice. Here is their Sambal Eggplant with rice, it’s actually quite nice, with just enough spice and sweetness in the sambal. The sambal isn’t as good as it is in PappaRich but overall it’s a pleasant meal.

The Lamb Murtabak at Corlam Kitchen is quite generous in its offerings, with the lamb filling stuffed inside the roti. What I would have liked is if the Murtabak itself as a tad more crispy on the outside however the meaty filling inside with the curry sauce is one of the better Murtabak’s around and to be honest the tasty curry sauce that comes with it isn’t enough to eat my way through the dish. Other than that, it’s probably number three as my favourite places to order it (Taste of Singapore and Mamak as one and two)

The flavours of the dishes we ordered are on average quite tasty  and probably on part with India Delights. I haven’t had the chance to frequent Corlam Kitchen often but I definitely will.