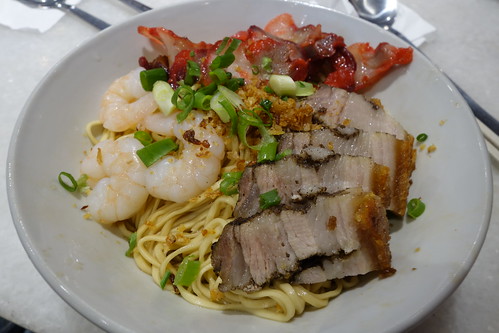 Funnily enough, I never even knew Kitchen Inn existed until earlier this year. I’ve probably walked past the shop numerous times on Elizabeth Street and yet never has caught my eye unlike Coconut House which seems very prominent towards the Queen Victoria Market side of Elizabeth St. Kitchen Inn serves Malaysian cuisine but more with a focus on Sarawak dishes as they offer Sarawak Laksa and Kampua which you may not find in other Malaysian restaurants.

Kitchen Inn’s Kampua Special is basically noodles with a light sauce served with crispy roast pork, and char siu (Chinese BBQ pork). I must say, aside from the generous use of oil in their sauce, it’s absolutely delicious. The sauce is subtle in flavour, reminding me of a slightly sweet soy sauce and goes well with the noodles. My only other disappointment is the char siu isn’t particularly appetising with its vibrant colouring, and overall fatty cuts of pork. Still, either the Kampua Special or Kampua is one to try here. Just be warned with the smaller serving sizes here. 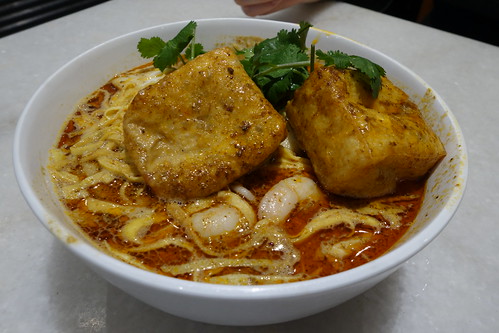 The Sarawak Laksa is also something I’ve never come across before as I never have visited East Malaysia when holidaying there. Typically, what differentiates a standard curry laksa with a sarawak laksa is it doesn’t have curry as its base but instead it’s a base of sambal belacan, tamarind, galangal, lemon grass and coconut milk. It’s also an acquired taste, but that may be because I’m so used to the flavours of a Curry Laksa or Assam Laksa. It is certainly interesting taste wise with a strong spice backing, so it may not be for everyone. 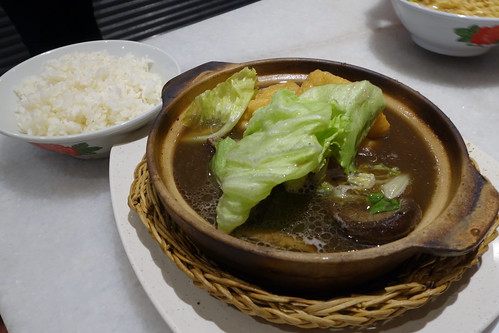 Kitchen Inn’s Bak Kuh Teh is also slightly different to the typical Bak Kuh Teh that you can buy the pocket of herbs and spices in many Asian groceries in Melbourne. It has a stronger spice to it, presumably from the star anise and cloves and it definitely tastes more herbal. Their Bak Kuh Teh is also laden with oil, possibly from the fatty pork ribs or just added extra with the soup. It would be very welcoming on a winters’ day.

Impressions
Kitchen Inn overall is pretty good, I haven’t come across Sarawak food before so it may just be me not being used to the style of cooking. However, the standout is their Kampua Special and during certain hours, a few of their dishes are ridiculously cheap. So for something a little bit different to your average Malaysian restaurant, Kitchen Inn is here to serve.

PappaRoti is a popular franchise/bakery in Malaysia. Probably not as popular as RotiBoy but still these Mexican buns are sold in many shopping centres in Malaysia and now we have a couple of stores down here in Melbourne. The first one I’ve seen to pop up was on Kingsway, Glen Waverley but there is also another one that recently opened on Elizabeth St (Across from Melbourne Central) in the Melbourne CBD.

These buns have a sweet crunchy crust on top, and you can smell these buns baking in the ovens far away. The crust I believe has a coffee taste to it but it’s more delicate. It’s sweet, but that’s a good thing since it stops you from having too many!

Inside they place some butter before they are cooked, so when it’s done. The inside is nice and soft, with a rich butter texture to it. It’s actually quite nice but you definitely can’t have too many.

Compared to RotiBoy’s variety of buns, who sell these buns with butter, cream cheese and blueberry cream cheese, Papparoti only sells this one particular bun with butter. The store in Glen Waverley also sells coffee and ice cream but I haven’t taste tested them yet. I might try their ice cream once this winter finally passes.

Their ice-cream selection is actually quite decent. They have the usuals like Rum & Raisin, Strawberry Jam, but then they venture into the Asian favourites like Durian, Black Sesame, Lychee and Red Bean.

I tried Lychee and Black Sesame on my first go, and whilst the Black Sesame was too sweet and lacked the nice bitterness of black sesame, the lychee was an instant favourite. It had an authentic lychee flavour and was smooth and creamy. I haven’t seen many places that sell Lychee ice-cream, and one that tastes good too, so whenever I’m feeling like a cold treat (nearly always) this will be the first place I visit.