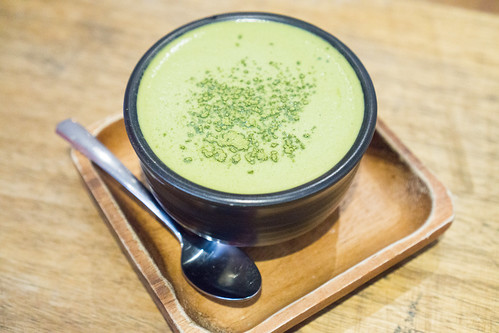 Little Rogue is tucked away in one of Melbourne’s many laneways and it almost seems strange to come from the always crowded Swanston St and find this gem on the relatively quiet Drewery Lane. Little Rogue is famously known for its Matcha Lattes and coffee and there’s usually a selection of small bites sourced from other local suppliers such as donuts from Shortstop or baked goods from Penny for Pound.

Their Matcha lattes is what every person seems to come to Little Rogue for, and rightfully so, because their lattes are fantastic. It’s smooth, frothy and has an amazing bold, slightly bitter green tea flavour. It’s honestly unmatched.

If you want your Matcha latte fix. This is it.

Third Wave Cafe in Prahran is the sister cafe to their first cafe/restaurant in Port Melbourne. The Port Melbourne location specialises in American BBQ, and that also carries over to the Prahran restaurant. Third Wave Cafe Prahran mostly does breakfast/brunch/lunch but from Thursday to Saturday they do open their doors for dinner. The chef is Ryo Kitahara who is the protégé of Iron Chef Sakai, which I must admit is pretty special. I was a big fan of the Iron Chef series.

Their location might be easy to miss if you don’t know where you’re going, Google Maps took me into the other direction! It’s located across from a gym (could be an after gym workout meal), on the side of the Woolies and close by to the Prahran Market on Cato Street.

I was invited here by Third Wave Cafe to try their menu and I thank them for the opportunity.

It isn’t your typically cafe in the sense that it lacks outdoor dining but it’s such a pleasant atmosphere it isn’t missed at all. They have a bar stools area as well as your standard dining setting with plenty of lighting.

Their menu is diverse and you may find it difficult to finally decide on what to order. Having gone for brunch/lunch we ordered a couple of different dishes to try.

Third Wave’s Pulled Pork Slider with fries tastes as good as it looks. The burger itself contains the pulled pork, with pickled cucumber and fresh coleslaw and their own BBQ sauce. The just cooked pork is seasoned well (and not too salty), adding a bit of the spicy BBQ sauce it complements the slider well. The cold coleslaw in a burger is something I’ve often not tried but here it makes for an interesting combination and certainly feels fresh. The coleslaw itself is light and not too rich in its use of mayonnaise.  The fries are also light and crispy, and not heavy in its use of oil. A very pleasant surprise on how well everything was cooked, without feeling guilty over eating a burger with fries.

One of Third Wave’s specials is their Texan Fry Up and just maybe one of my favourite dishes ever, really no joke. The slow cooked smoked brisket is the highlight of this dish. It is just simply cooked to perfection. The smokey brisket practically teleports you to an American Steakhouse. It’s most definitely the best meat I’ve ever tasted. Tender and flavourful.

The mushrooms, potatoes, tomatoes all complement the star of the dish and with a small amount of the spicy BBQ sauce it is just simply delicious. The poached egg oozes yolk although the outer most part of the yolk is hard boiled.  Overall, it really makes me want to try their dinner menu because this dish is cooked so well here.

On a side note: this dish was oddly on the breakfast page of their menu under specials, but it seems more like a lunch item to me.

Their Spicy Ratatouille Baked Eggs also looks as good as it tastes. I’ve actually only recently tried a similar dish at Red Cup Cafe in Box Hill, both are similar in the ingredients they use and both I say are more than satisfying.

The Spanish Chorizos add the spiciness to the dish, and with the addition of zucchini, eggplant, red peppers, tomatoes and of course eggs topped with Asiago cheese is another winner. Served with toasted Ciabatta bread it is one of those feel good warm dishes that I can see myself eating on a cold morning. The saltiness of the dish comes from the chorizo’s and it could be too much for some but eating this injunction with the crunchy bread and baked vegetables I couldn’t be happier with the meal.

From my understanding, their hot drinks come with this bite sized mini meringue that has this surprising ginger and possibly cinnamon flavour. Eating this with your coffee, you may even find yourself thinking you just ordered a Chai Latte. Their Latte is light and not too intense. I usually prefer much richer, fuller coffee with not too much foam on top. This isn’t the case here but it is in no way bad, just a decent cup of coffee.

Third Wave Cafe definitely impresses with their selection of dishes and the quality of the dishes as well. I really cannot recommend enough the Texan Fry Up and to a lesser extent their Spicy Ratatouille Baked Eggs and with Third Wave Cafe’s Sweets, Paninis, Russian Menu. I don’t think you’ll be bored by the menu anytime soon. Whenever I go back to Prahran, a visit to Third Wave Cafe is on order.