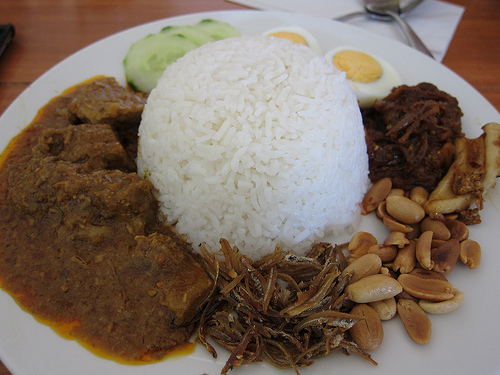 Nanyang Kopitiam is located on Canterbury Road, close to an Indian grocer and a BP Petrol station. They offer a mix of Malaysian and Chinese dishes for a decent price. It’s not exactly a popular part of Box Hill, it’s actually very quiet even around the peak lunch time period on a weekend. [Update: Apparently this has closed down]

They don’t particularly have a great range of dishes to choose from, but they do have all your standards offered in many Malaysian restaurants here. One that seems to be on more Malaysian menu’s now is the Mee Rebus, and luckily for those Mee Rebus lovers out there, this is on Nanyan Kopitiam’s menu.

I’ll first talk about their Nasi Lemak. You get your choice of Curry Chicken or Rendang Beef like most Malaysian eateries, I often choose their Rendang since I like the flavours more so than your usual curry. It’s probably also that I often have Curry Chicken at home anyway.

Their Nasi Lemak also comes with your standard sides,  so nothing out of the ordinary here. Their Rendang was a bit too tough for my liking, I think it’s because they hadn’t cooked it long enough but the sweet and spicy flavours were all there. I did enjoy it to be honest but the toughness was a bit of a letdown.

The sambal was overly sweet, and lacked that chilli punch that Taste Of Singapore has.

Overall it was a decent meal, and if you’re in those parts of town their Nasi Lemak is definitely okay.

I had a little taste of their Mee Rebus and it was quite good but it was odd because their sauce was extremely watery but it had all the essential flavours in it. I’m usually used to a thicker gravy but although this was different in looks, the taste was all there.

Probably the stand out for me was their Roti Canai. Their curry was delicious and had loads of flavour. It wasn’t too creamy and had just enough spice and heat to it. Along with their fresh roti (Their own roti if I’m not mistaken), that was nice and crisp on the outside but soft inside, I couldn’t really fault it.

Nanyang Kopitiam’s Char Kway Teow looked great. I only had a small taste of this as well, but again, it had a good balance of flavours and spice to it. People rave about Straits Char Kway Teow as one of the best in Victoria but this isn’t too bad either.

Strangely enough they say Kopitiam but it lacks many of the drinks you may find in a Kopitiam like for instance, Teh Tarik. I can’t remember if they served Coffee but I have my doubts.

All in all, if you’re in the area Nanyan Kopitiam will satisfy your Malaysian cuisine cravings. Even if you’re not , it’s decent enough to give it a try.