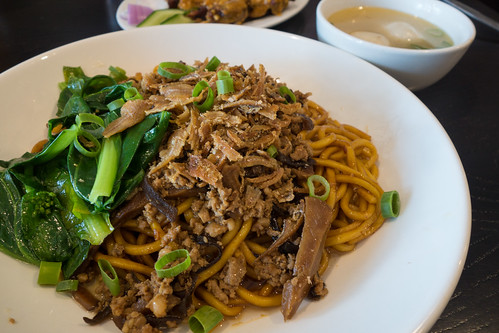 O’Town in Glen Waverley replaced Hakka Tea House this year. O’Town specialises in Penang cuisine, many of my favourite Malaysian dishes have origins in Penang such as Char Kueh Teow, Har Mee and Mee Rebus but of course you can find many of these dishes elsewhere in Malaysia but it’s telling that there are eateries in Kuala Lumpur/Selangor that prides itself on Penang dishes.

O’Town’s decor is very reminiscent of the streets of Penang, with its British influence and Penang’s famous street art replicated on the walls.

O’Town’s Hakka Kon Loh is served with fishball soup and taste wise it was oddly familiar, like a drier Pan Mee because of the mushrooms and crunchy anchovies. It’s subtle in flavour as I did require some sliced chilli to go with it but I was happy with the flavours nonetheless. The soup is pretty much your typical Asian stock soup so nothing really out of the ordinary. 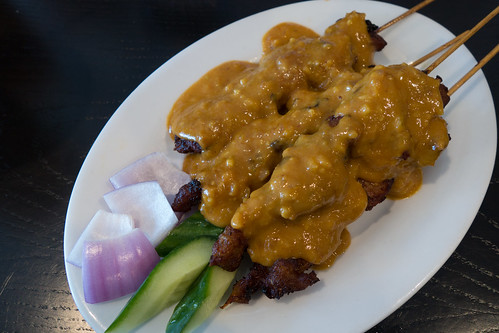 The Chicken Satay’s here aren’t grilled, instead its deep fried. So it has this crispiness to it, however it isn’t quite the same as the smokiness of a grilled satay stick. The peanut sauce is pleasant, with a wonderful nutty aroma I preferred it to the actual satay to be honest. That’s not to say it’s a bad satay dish, just different. 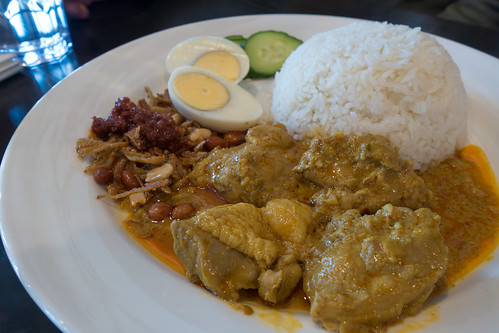 O’Town’s Nasi Lemak comes with a very tasty Chicken Curry. I loved the creaminess of it, yet not overpowering with the spices. A good balance of ingredients. The sambal is nothing really to run home about but definitely above average. 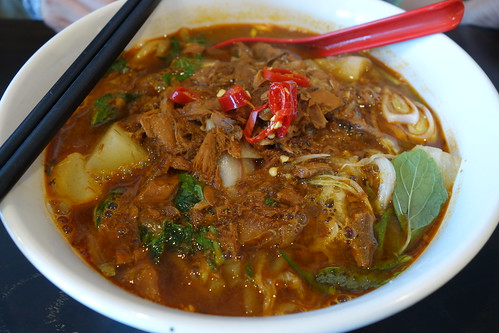 When ordering the Assam Laksa we were worried they would use sardines instead of other fish, luckily our worries were squashed as they use small fishes but definitely not sardines. Sardines give off a very strong fishy flavour which, more often than not, overpowers the Laksa flavours. Here the Assam Laksa has a lighter soup base taste but it’s one of the better Assam Laksa’s around. 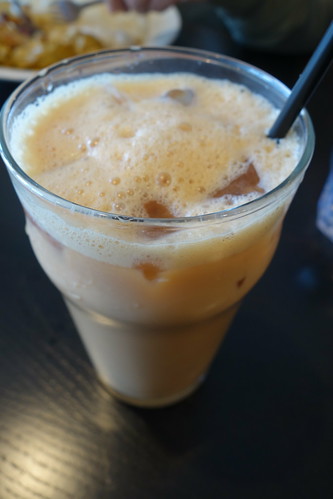 The Ice Teh Tarik is not bad a bit light as I actually prefer a stronger “Teh” flavour. When talking to one of the staff, it appears that initially the Teh Tarik here did indeed have a stronger tea taste to it but people complained (what!). In any case, the staff mentioned you can request for a stronger Teh Tarik if that’s to your liking.

Impressions
O’Town makes a mark in Glen Waverley, adding to the Malaysian restaurant scene and yet all have slightly different styles of Malaysian dishes due to their local origins (e.g Penang, Malacca, KL, Sarawak). The food here is on average pretty good, but nothing came across as amazing from the dishes we tried.

Straits Cafe near Knox is a popular Malaysian eatery, mostly known for it’s tasty Char Kway Teoh and overall good food. It’s extremely difficult to get tables during the weekend as the place doesn’t cater to many people (space is small) and well, people just enjoy going there to dine.

Sometimes Straits has specials on posted at the back whether it be main dishes or entrees. We ordered their Friend Chicken with Sambal seasoning. It was served fresh and straight from the fryer and was quite tasty. The skin was crisp and crunchy, and the chicken was cooked well. I couldn’t really taste the, I presume, spicy seasoning but for Malaysian Fried Chicken it was tasty nonetheless.

I believe they are quite well known for their Char Kway Teoh because of it’s authentic Malaysian flavour and one of the more spicy offerings around. There is just something I can’t really put my finger on it, that gives it that extra hit. It’s that special “wok” flavour but it’s so vague and indescribable that it’s best not to talk about that any further. You really are hard pressed to find a Char Kway Teoh as flavourful, spicy and overall tasty as this. I’d say Claypot King in Glen Waverley had nearly or even just as good of a offering as Straits but they no longer operate so the crown goes to Straits.

Their Char Hor Fun has stir fried hor fun noodles which are always a delight. The egg sauce is delicious, and I believe they put in the deep fried  diced lard but I can’t be certain. Everything here was tasty, the seafood and chicken cooked nicely, and a good serve of vegetables. My only criticism, even if, ever so slight, is that they put the preserved (vinegar) chopped green chillies on the plate as well. So if you don’t like your sauce a tad sour, it can make the sauce kinda strange as somehow the chilli flavour spreads throughout the whole sauce. Again, nothing to make a fuss about, but it may not be to people’s likings.

One of their main specials was the Tok Tok Mee, which is apparently Penang Style. I can’t vouch for that as I have never tried it in Penang but this dish sure looked delicious. It had a wide selection of toppings from the steamed chicken, char siu pork, crumbed chicken, boiled wontons and vegetables. It really had it all.

Straits’ Teh Tarik was a slight letdown as it was overly sweet and lacked the pulling tea flavour. It also wasn’t frothy enough but still may please some people.

For a sweet warm dessert, Pulut Hitam hits the spot. My mother does an excellent Pulut Hitam, that is much less sweet and actually tastes better as a result (Go figure) but for a restaurant offering, it’s quite nice. It has those black sticky rice that give it that added texture and the coconut cream provides the creaminess that is much required. Overall, it’s a pretty good Pulut Hitam as many places don’t offer it, although slightly too sweet for my tastes but maybe I’m just spoilt with my mother’s delicious cooking.

Straits Cafe offers a good variety of Malaysian dishes and most of them do hit the spot. The authentic Malaysian flavours is what people come back for and you can certainly see why. On weekends it was definitely is preferable to book ahead as without a reservation you may be waiting for quite some time.