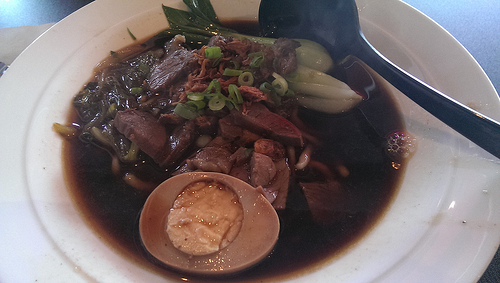 Foods Paradise across from Glen Waverley Railway station replaced Ho Chak earlier this year. It serves a mixture of cuisines such as Malaysian, Taiwanese and Chinese.  There are a number of dishes on offer on their menu, starting off with the xiao long buns, rice & noodle dishes and combo meals.  It’s an interesting variety of dishes I must say.

We ordered the Braised Beef Noodle Soup, pictured above. It has that soy soup base that you may find familiar to that of Soy Chicken with an essence of something herbal too. I’m not a big fan of this kind of soup or sauce for that matter but it is flavourful for what it is.

To try something different, I was attracted to the Shark Fin Noodle Soup that was pictured in the menu with the green tinged noodles. This dish looks amazing, but the taste is a spectacular let down for its complete blandness and overload of mushrooms as its primary flavour. The soup lacks any real substance and the “shar fins” add that element of texture to the soup but with the soup base itself lacking in any substantial flavour it comes out as a disappointment unfortunately. The noodles are cooked well, not too soggy and has a nice bite to it (just a tad dense/spongey) I guess that’s the plus. As mentioned previously, the mushrooms completely overwhelm everything else. They also add strips of seafood stick pieces, it’s neither interesting nor does it complement the noodles and soup. It feels like another bland addition. I’m sorry for the scathing review of this dish but it really wasn’t in anyway great.

Foods Paradise’ s Wat Tan Hor is at the very least decent. The egg sauce is wonderfully appetising, and quite similar to the other great Malaysian restaurants around Melbourne. I’ll stop short to say it’s genuinely authentic but it is genuinely tasty. It is also generous in its seafood and chicken. The much sought after wok flavour is present in this dish so I’d say this is a winner (comparatively)

It’s exceedingly common to see new restaurants have extensive Food, Drinks and Desserts menu. While Foods Paradise offers the first one, it lacks in Drinks and Desserts which is a shame. What I haven’t mentioned here is their Beef Rendang in Deep Fried Bread is an interesting and tasty dish in itself, although I’ll warn you the bread is very oily. So take it in small portions.

Foods Paradise has its moments of greatness and disappointments. I find it to more leaning more towards the mediocre side of things as a result. I don’t even know whether to say give it a try or not it’s that 50/50. If you like to take a gamble, I guess give it a go?