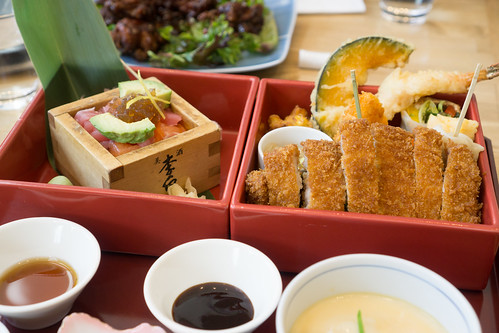 Located in Eastland’s Town Square, Kyoto Cafe provides a bit of Japanese flavour to Ringwood. Its interior is reminiscent of modern Japanese restaurants with its generous wood panelling all around.  It has an open kitchen with kitchen-side dining, and room upstairs as well.

While Kyoto Cafe do offer a few Donburi’s (Rice bowls), they do have a more extensive Yakitori menu, as well as tapas dishes, sushi and bento choices. They also offer a few dessert options, most are displayed at the front of their restaurant which are basically a variety of cakes and cream puffs to choose from. 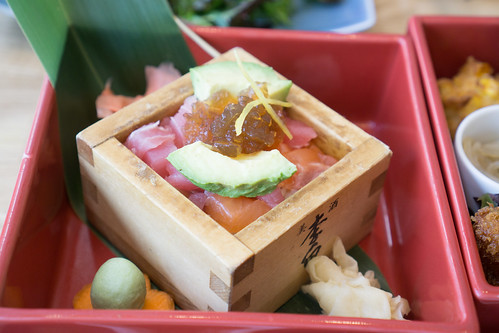 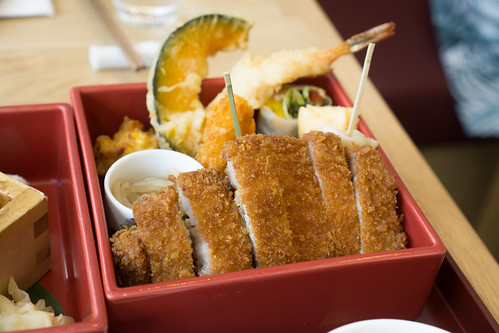 One of their bento options comes with fresh sashimi, tempura, chicken katsu and steamed egg with dipping sauces.

The sashimi were sliced into smaller pieces, but tasted quite fresh. The chicken katsu was crispy, and tender, while the tempura was also crisp with a light batter surrounding it and soft inside. There was also this odd vegetable wrap, I wasn’t fond of it and tasted a bit bland. 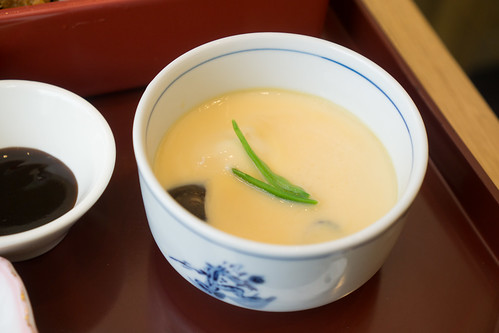 The steamed egg wasn’t as soft as I would have liked either and also was a tad under seasoned but still one of the better ones I’ve tried. 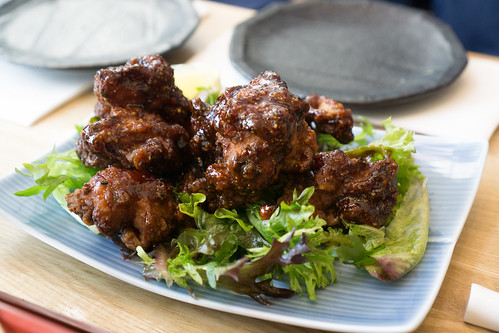 The Japanese Fried Chicken here has this very dark, sticky glaze on it. The chicken was tender and crisp but I wasn’t overly impressed by the flavour of the marinade. Just give me the normal Chicken Karaage. 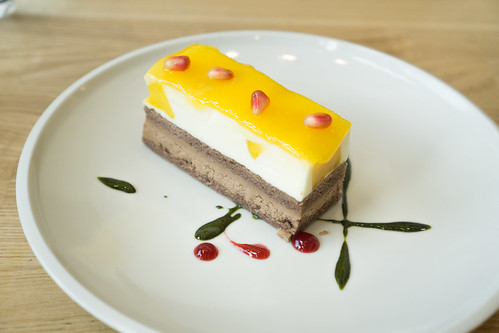 To be honest, the main reason for coming to Kyoto Cafe was to try their desserts. The Yuzu cake had an amazingly punchy Yuzu flavour with a soft mouse layer, and a cake base. 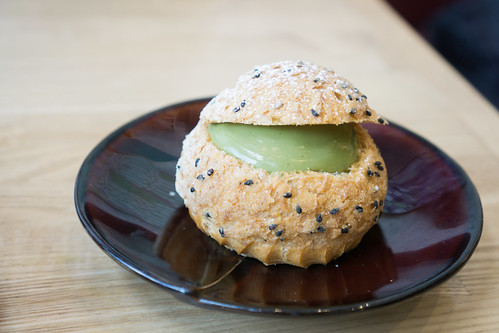 The Green Tea cream puff wasn’t as crunchy as I’d like but it had a great Matcha cream flavour inside that kinda oozed out. The Black Sesame flavoured one is on the list to try!

The ambience at Kyoto Cafe makes for a great dining experience. The food here, while it may not be amazing, will give you a tasty meal and sometimes that’s all you’re after. The beautiful desserts don’t hurt either. 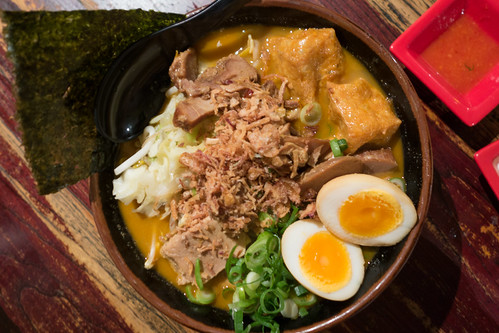 DonToo, part of the Don Don’s family is like their other outlets where they serve a selection of Donburi dishes during lunch time. However interestingly, during the evening it offers a number of different ramen to choose from. With ramen stores rising in popularity, DonToo’s ramen still is a fine place to go to.

One of their ramen’s is their Laksa Ramen with a creamy curry laksa soup base. It’s quite a generous serving and with the lovely Japanese style eggs as well. Laksa Ramen isn’t too common and it would be one of my first choices! 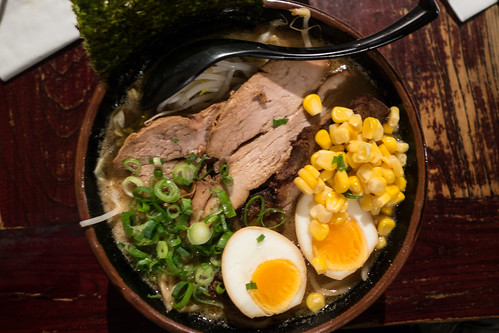 Their Miso Ramen is also very tasty, flavourful and the addition of corn is a nice touch. I found they add just a bit too much bean sprouts but that’s a small negative. 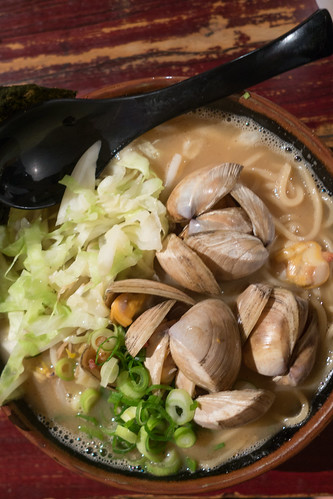 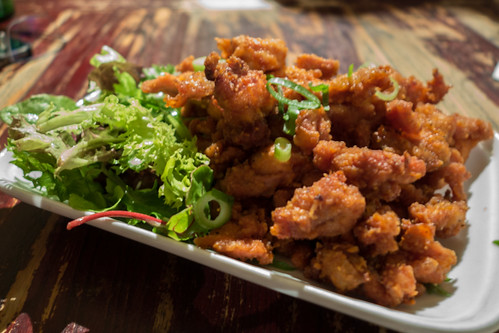 With this store, beers are on the menu so what goes well with beer? Fried Chicken, naturally. Try it with the chilli sauce!

DonToo does lunch well, like Japanese fast food and it does ramen even better.

Ajisen Ramen is a popular Japanese franchise that offers an array of Japanese dishes. Of course, going by the name, its main attraction is the Ramen. Ajisen Ramen’s first Melbourne restaurant was on Bourke St, Melbourne. It has been there for many years, I think ever since I was in high school. I remember my friend ordering an Aussie Ramen, it was one of the strangest fusion dishes I’d ever seen. I believe it had fried egg, beetroot and other “typical” Australian ingredients like you’d find in a burger. I don’t think it’s on their menu anymore, probably an indication of its extreme popularity. Ajisen Ramen is a more recent entry to Glen Waverley, after the seemingly empty Korean restaurant before it closed down, and most weekends during lunchtime, even in the late arvo, you’ll find this place full.

I ordered the Tonkatsu Ramen, as seen in the opening image. What we have here is Deep-Fried Pork, egg and an assortment of vegetables. I quite liked it, you kinda to either eat the pork quickly or take it out of the bowl in order for the pork to retain its crunchiness that you would typically find in a Tonkatsu Rice dish. If you leave it in too long, it kinda gets too soggy but the flavour is still there so if you don’t mind it then it really isn’t a con.

The soup is mild, but definitely has some flavour. I quite like it and even though the bowl appears a tad small, it is filling.

This is the Spicy Ramen, with “Spicy Meat” which is not pictured. It’s servered separately on a plate. This is slightly different to the Tonkatsu Ramen as the soup base is spicy. It actually has quite a good hit, and it’s served with cabbage instead. Overall, it’s pleasant and the amount of heat is surprising for a Japanese restaurant.

If you order a Sumo Combo, ($5.50 extra) it comes with your pick of Junior Donburi and Green Tea. Well worth it if you’re particularly famished. Here we have the Junior Unadon, which is Grilled Eel with Sauce on Rice. I’m not a big fan of eel, but the sauce makes all the difference here. Nice balance of sweet and salty.

Here we have the Junior Teriyaki Salmon Don. I find the Junior serves if you don’t order the Sumo to be extremely poor value for money. It really is just a few mouthfuls, and for only a couple of dollars more you get a much larger serving. I also found the Teriyaki sauce here to be lacking, its mainly because the sauce is almost non existant! The Salmon was nicely cooked though, still pink inside so not overcooked. So overall the dish is a bit bland.

I ordered the Katsu Curry, with Deep Fried Bread Crumbed Pork with Japanese Curry on Rice. I love Japanese Curry, it’s so different to the Malaysian-style curries that most people have come to love but it for me, it holds its own.

I find Ajisen Servings to be slightly smaller than most other Japanese restaurants, even the Japanese Cafe in Chinatown is gigantic compared to here but nonetheless it’s still filling. I just find that it’s generally more expensive but smaller portions. What I love about Ajisen’s offering is that it’s actually spicy! Not just a hint of spice but a good punch. So different to the standard curries I’ve ordered around town as they are usually much sweeter.

The Pork goes really nicely with the curry, and although the curry can make the battered layer of pork soft, it isn’t too bad. Compared to the Tonkatsu Ramen, it goes soft slower so it’s not too bad. With this you get your standard diced carrot and potato. In this case, they pre-fry the potatoes giving it a slightly potato fry kind of flavour to it. It’s a subtle but nice way to bring another element to the dish.

Overall, you can see why Ajisen Ramen is extremely popular day in day out. I’d say service is surprisingly decent too, they have these little PDAs to take your orders and the food comes quickly enough. I’d probably bet they just want you out of there as quickly as possible but it works well. As I’ve cautioned before, if you’re used to the large servings in the many other Asian restaurants in Glen Waverley, don’t expect them here. It’s slightly smaller and more expensive. However the major plus is that the food is pretty darn good. So if see empty seats in this popular eatery, grab it and enjoy!