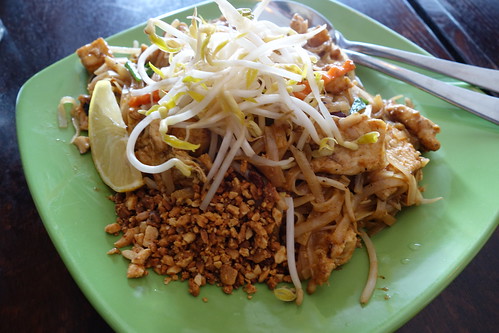 Jaidee Thai is one of the numerous Thai restaurants towards the Hoddle Street end of Victoria Street. Jinda Thai, iSpicy 2 and Ying Thai are also located around these parts of town. Jaidee Thai is the newcomer on the block and what they offer isn’t too different from the rest.

Jaidee Thai’s Pad Thai looks great with its combination of chicken, fresh bean sprouts and chopped peanuts. However taste wise it falls a bit short compared to the likes of Jinda Thai’s Pad Thai and even iSpicy’s. The aroma and flavour of the sauce used isn’t as strong, and if you have ever tried Jinda Thai’s version, you’ll instantly be able to tell the difference. Over there, it’s fragrant as it arrives in front of you, with the nutty smell of the chopped peanuts. Although that is not to say Jaidee Thai’s Pad Thai isn’t good, it has its pros but with so many Thai eateries around, a dish like this needs to stand out. 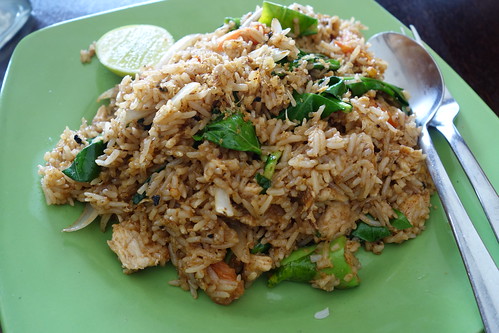 Jaidee Thai’s Thai Fried Rice (Chicken) served with a slice of lime smells and tastes great actually. The chunky tomato adds depth to the fried rice, along with the greens. The let-down of the dish is that the rice is on the wet side of things, which makes the fried rice feel soggy. I definitely prefer my fried rice to be drier but this might be the Thai style of Fried Rice as I recall dining at Tom Toon Thai Noodle Cafe and it was quite similar.

Impressions
Although I haven’t been left impressed by the dishes I’ve tried, you’ll still end up with a decent meal at Jaidee Thai. I’d probably give it another go sometime in the future, but Jinda Thai is still the one to beat.

I ordered the Spicy stir fry crispy chicken with sweet basil, fresh chili and green beans on rice which was marvellously spicy. It packs a lot of heat. It’s definitely not to everyone’s tastes but the crispy chicken was soft and light in texture but also crispy. Really nice.

It was complemented by the spicy beans and chilli. It’s hard to describe the taste, it is mostly spicy but has a bit of salt and sweetness to it so that the chilli isn’t too over powering.

Their other dishes look just as lovely and again lives up to its name of iSpicy. Compared with Ying Thai, I still prefer Ying Thai it has more subtle flavours but definitely more complex and appealing. You’ll find a decent meal here, but probably just not for everyone.