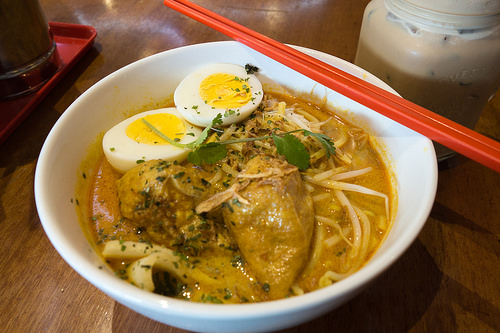 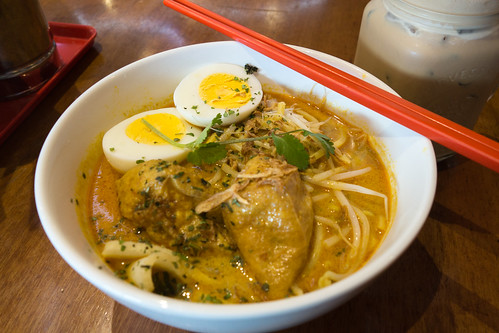 If you have been to Killiney Kopitiam‘s Lygon St or Bourke St stores you know what to expect from the Richmond outlet. Killiney Kopitiam serve Singaporean cuisine, the word Kopitiam in Malay means coffee shop and as expected they offer an array of drinks and of course a decent selection of rice, noodle and roti dishes. There are a few Malaysian/Singaporean staples such as Laksa, Nasi Lemak, Mee Goreng but there are also some interesting dishes like Mee Rebus and Mee Siam and Durian Pancakes for dessert.

Killiney’s Curry Laksa hits all the right notes for a great Laksa. Just the right amount of creaminess, spice and just the subtle flavour of mint. 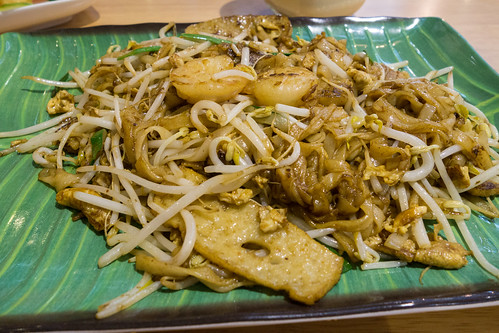 Their Char Kway Teow has that required “wok flavour” but I found they added too much bean sprouts and the choice of thin noodles isn’t to my liking. However, taste wise it’s pretty good.//embedr.flickr.com/assets/client-code.js 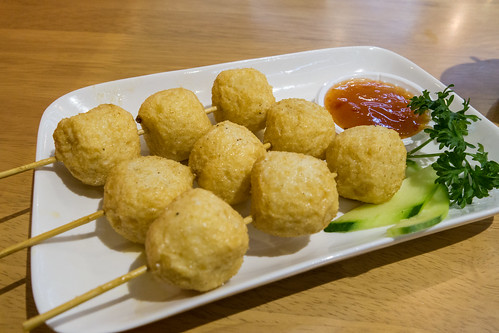 The Richmond store have an all-day everyday $15 menu with a choice of a few entrees such as these Fishball Satay Sticks or Kaya Toast, and with a selection of main dishes like the Laksa, Char Kway Teow and Mee Rebus and a choice of drinks such as Soya Milk and Tea. 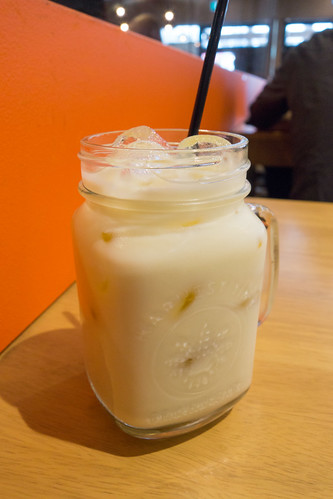 A cold glass of Soya Milk hits the spot. Not too sweet and lovely soya bean flavour.

Killiney Kopitiam enter the Richmond food scene without much competition. There isn’t many Singaporean or Malaysian eateries around these parts so it is much welcomed, and luckily the food is pretty good too.

Killiney Kopitiam is a Singaporean franchise that has opened up on Lygon St, Carlton. Near to the famous Gelato/Ice-creamery, Il Dolce Freddo. As a Kopitiam, they serve a selection of hot and cold beverages such as coffee, tea, Tek Tarik and Milo and also a nice and decently priced selection of Hawker style dishes, and Traditional Singaporean/Malaysian dishes.

Their Mee Rebus was slightly spicy and had a nice tangy flavour to it, like it should be. However, the sauce was overly running and that was a bit strange to be honest. Killiney Kopitiam’s dishes are probably smaller than most other Malaysian/Singaporean restaurants around Melbourne but because most of their dishes are under $9, it probably is still good value for money.

I also tried their Singaporean Laksa and that was surprisingly good. The Laksa soup was nice and creamy, with a good amount of spice and coconut flavour. The fresh bean sprouts, chicken, tofu, boiled egg and chopped coriander all worked well together. The bean sprouts and coriander especially made it taste very fresh, which was even more surprisingly because I don’t usually like it with anything.

To go to a Kopitiam and not order Teh Tarik would be unacceptable for me. Their Teh Tarik was actually pretty darn good, it didn’t have as much tea flavour as Chillipadi Kopitiam but way above some of the other offerings I’ve had around Melbourne.

Overall, my impressions of Killiney Kopitiam are mostly positive. Their food came pretty quickly, and staff were friendly enough. The restaurant also had a nice atmosphere to it, probably because it looked clean for an Asian restaurant. Ha!

I definitely recommend this place for those students around Carlton, or even if you want something different on Lygon St. Even if you’re not around the area, as one of the few Singaporean eateries around Melbourne it probably is worthwhile to visit. You can have a look at the menu here!