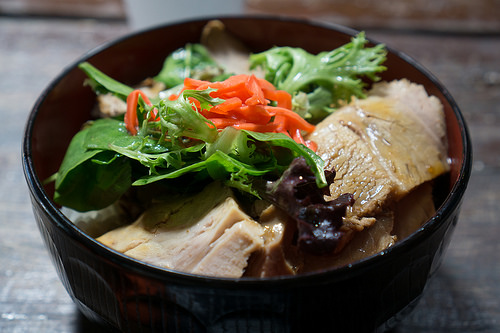 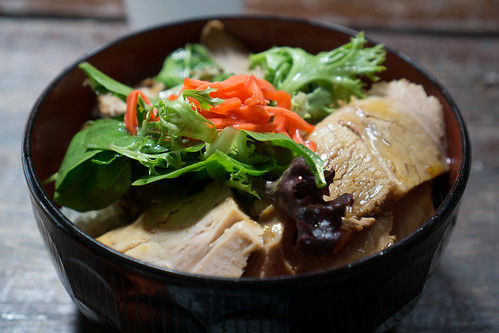 Don Tojo is pretty much the Don Don’s of Carlton. Quick, fast and easy Japanese food. The menu isn’t very diverse with a few pork, beef and chicken dishes, curry and noodle soups but they excel in what they do.

The Buta Teriyaki Don is basically slow cooked pork on rice with teriyaki seasoning. I liken it to slices of roast pork with the teriyaki flavouring. It’s quite nice, though the pork I find a bit dry and lacking in vegetables or other accompaniments but it’s cheaper than your typical Asian/Japanese food so it makes sense. 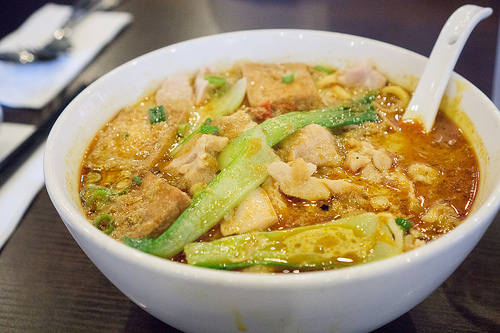 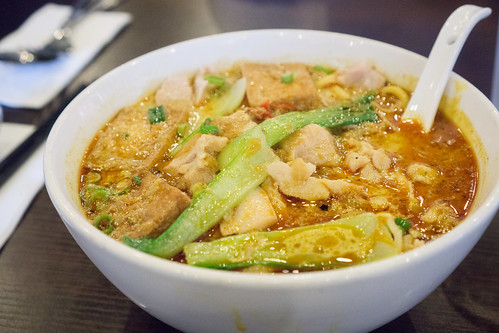 Kim Sing opened its doors earlier this year under new management after Madam Kwan closed down. Their menu has been tweaked and a number of menu items have been removed from the menu, but Kim Sing still has a mixture of Malaysian/Chinese style dishes on offer and they advertise itself as Kim Sing, Truly Malaysian Delights. So expectations are high with that statement.

More often than not, I always try a new Malaysian restaurant’s Curry Laksa to see if they can trump Laksa King and Chef Lagenda. Kim Sing’s Laksa is a letdown, and substantially poorer quality than its predecessor. It has this watery, curry powder flavoured taste to it. A Curry Laksa it ain’t. 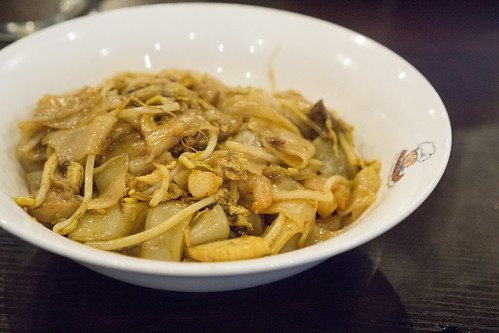 Their Char Kway Teow is served in a bowl, for some odd reason and with Madam Kwan’s logo still placed on all its crockery. It has that ‘wok’ flavour, so thank goodness for that but there are several oddities with this dish. It uses Char Siew (BBQ Pork) as its protein instead of Lap Cheong (Chinese Sausage). The prawns are tiny, and they don’t add in the deep fried Pork Lard but usually I can live without that. We also ordered it spicy, but no heat to it whatsoever. The substitution of Lap Cheong with Char Siew completely changes the taste of the Char Kway Teow. Very strange. 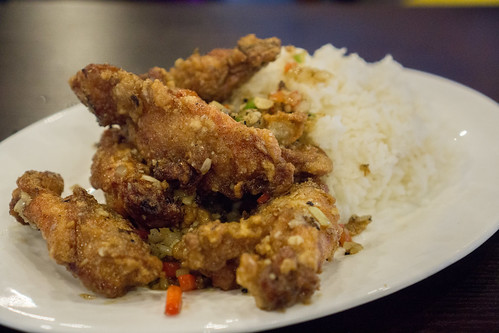 The Salt & Pepper Chicken Ribs with rice was actually quite nice. No chilli, which I think it needs to give it a bit of kick and depth of flavour but the chicken is crispy and still moist but they aren’t very generous with their fried capsicum and onion which I think is needed to give the chicken and rice much needed flavour. Decent but you can probably find better elsewhere in Box Hill.

Kim Sing unfortunately does not live up to its Truly Malaysian Delights statement. It serves quite frankly, mediocre dishes that are so disparate from traditional Malaysian dishes. 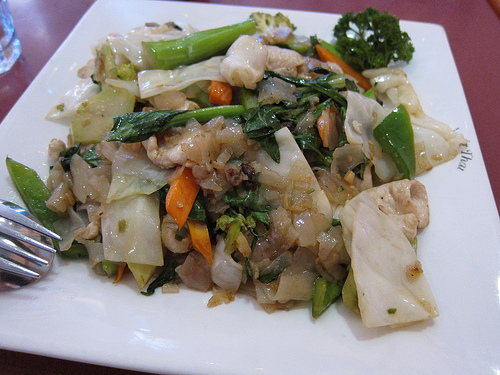 Ying Thai is the first location of this popular Thai restaurant. Ying Thai 2 is located in Carlton and is frequently visited by Melbourne Uni students and locals. The Richmond venue doesn’t appear to be as popular around lunch weekdays but it doesn’t indicate quality whatsoever.

The dish pictured above was the Chicken Flat Rice Noodle with Chilli and Basil, otherwise known as Pud Kee Mow. What I liked about this dish was that it was spicy, and a really decent hit of chilli at that. It might be too spicy for some, but it just hits the spot for me.

The Pud Kee Mow, you can choose your protein of choice from Chicken, Beef, Pork or Vegetable, like many of their dishes actually. I’ve never actually had this before but I really did like the flavour, the spiciness, a bit of soy that adds sweetness and a hint of salt and the basil. You can’t forget the fragrant basil.

They add carrots, capsicum, broccoli and cabbage if memory serves me correctly. I liked the abundance of vegetables no matter how oily this stir fried noodles dish may be.  The chicken was on the tougher side, but I wouldn’t call it very overcooked. I think with stir fry it’s very difficult to cook well, so it was acceptable for me.

The Thai Fried Rice is also excellent, and very filling too. So tasty that I even forgot to take a picture. Next time.

Ying Thai serves as tasty Thai food. I may not know what authentic Thai food is but I know what my tastebuds say, and they say it’s pretty darn good. If you’re ever near the corner of Hoddle Street and Victoria Street, give it a go. Just may need to be a bit patient, sometimes it takes 10 minutes or more for food to arrive. 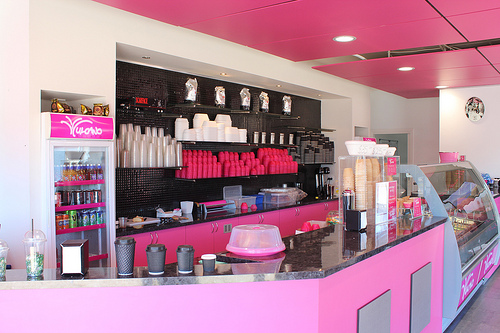 In Rye, across from the pier, there are a couple of ice-cream stores ready to fulfil your sweet desires. Cold Rock Ice-Creamery is one of the notable stores, but appears Vulcano Gelato has won the hearts (and mouths) of many visitors and locals alike.

You can see droves of people entering this very pink store but when looking in the other ice-cream stores, they are almost bare. I’ve taken some pics of the range of flavours below. Take a look!

Vulcano Gelato serves a great variety of gelato and ice-cream flavours, most are your standard flavours you’ll find amongst most gelato stores.

In this picture, you can see their own flavour, aptly called Vulcano. I didn’t get a chance to try it but it appears to be a choc full and looks likes devilishly rich.

As you can see there are your nice chocolate flavours, yogurt, mango, coffee etc.

I tried their Hazelnut and Pistachio flavours, being a nut flavoured ice-cream fan myself. Their Hazelnut one was quite nice, it definitely reminds me of Ferroro Rocher flavours like you’ll find in Il Dolce Freddo in Carlton.

To be honest it was nice, but really nothing too special about it. I’ve read reviews of Vulcano Gelato and it definitely is a favourite for most. Maybe I chose the wrong flavours. I’ll definitely give it another try if I’m ever in Rye again. Of course, any ice-cream is fantastic in a warm day. Well, even in cold weather gelato works a treat to brighten any day! 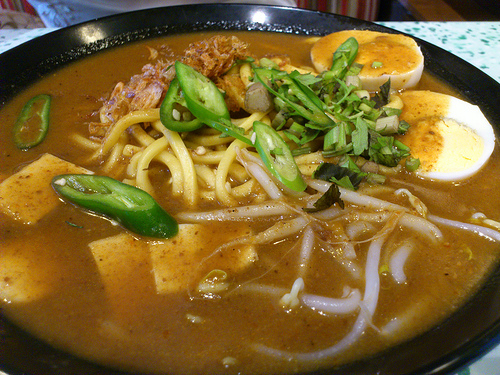 Killiney Kopitiam is a Singaporean franchise that has opened up on Lygon St, Carlton. Near to the famous Gelato/Ice-creamery, Il Dolce Freddo. As a Kopitiam, they serve a selection of hot and cold beverages such as coffee, tea, Tek Tarik and Milo and also a nice and decently priced selection of Hawker style dishes, and Traditional Singaporean/Malaysian dishes.

Their Mee Rebus was slightly spicy and had a nice tangy flavour to it, like it should be. However, the sauce was overly running and that was a bit strange to be honest. Killiney Kopitiam’s dishes are probably smaller than most other Malaysian/Singaporean restaurants around Melbourne but because most of their dishes are under $9, it probably is still good value for money.

I also tried their Singaporean Laksa and that was surprisingly good. The Laksa soup was nice and creamy, with a good amount of spice and coconut flavour. The fresh bean sprouts, chicken, tofu, boiled egg and chopped coriander all worked well together. The bean sprouts and coriander especially made it taste very fresh, which was even more surprisingly because I don’t usually like it with anything.

To go to a Kopitiam and not order Teh Tarik would be unacceptable for me. Their Teh Tarik was actually pretty darn good, it didn’t have as much tea flavour as Chillipadi Kopitiam but way above some of the other offerings I’ve had around Melbourne.

Overall, my impressions of Killiney Kopitiam are mostly positive. Their food came pretty quickly, and staff were friendly enough. The restaurant also had a nice atmosphere to it, probably because it looked clean for an Asian restaurant. Ha!

I definitely recommend this place for those students around Carlton, or even if you want something different on Lygon St. Even if you’re not around the area, as one of the few Singaporean eateries around Melbourne it probably is worthwhile to visit. You can have a look at the menu here!