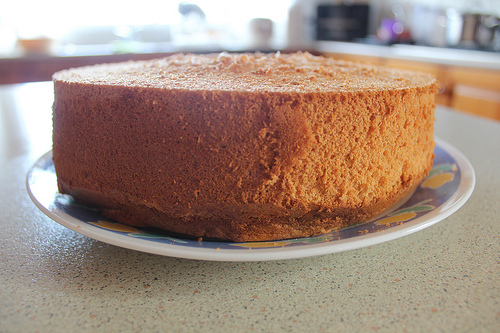 I was searching high and low for a nice looking Mocha Cake to bake for my mother. I came across Gourmeted’s Goldilocks Mocha Cake Recipe which looked fantastic. I’ve tried this a few times following the exact method however on both occasions my cake sank like a rock. One my third attempt I thought, why not use the tried and tested Chiffon Cake way. Here is my slightly adapted Gourmeted recipe below. A big thanks to Gourmeted because it’s a fantastic recipe.

2. Whisk together egg yolks and sugar in a large bowl (or bowl of a stand mixer) over low, then medium speed, until creamy and light yellow in color.

3. Dissolve espresso or coffee granules and cocoa powder in water and vanilla in a small bowl, getting rid of lumps while stirring. Pour into the egg-sugar mixture, along with canola oil, and beat until well combined.

4. Remove large bowl from stand mixer (if using one) and sift cake flour and baking powder over it. Stir with a wooden spoon until well blended, scraping the sides of the bowl once.

5. Whisk egg whites and cream of tartar into stiff peaks in a medium bowl, and fold into the mocha batter, a dollop or two first to liquefy the thick batter, and then in thirds.

6. Place the batter in the pan. Bake on two racks for 30 to 40 minutes. The cake is done when the tops become golden brown and the cake tester comes out clean when inserted in the middle.

7. Once ready, take out of the oven and cool upside down on a mug. If you want to make the icing, the cake must be left to cool completely.

8. For the Buttercream: Whisk sugar and egg whites for 3 to 5 minutes in a medium heatproof bowl set over a saucepan of simmering water (water should not touch the bottom of the bowl), until meringue is hot to the touch. The sugar granules will be dissolved and you will be left with a fluffy marshmallow cream-like froth.

9. Remove bowl from heat and beat for 5 minutes with a hand mixer set to medium speed, or pour into a bowl of a stand mixer with a whisk attachment to mix.

10. Add half of the butter and beat with a hand mixer (or paddle attachment for stand mixer) until smooth before adding the next half to combine. Scrape the sides of the bowl with a spatula and give it a quick stir. Beat again on medium-high for another 6 to 10 minutes to thicken.

11. Dissolve cocoa and espresso/coffee granules in water, vanilla extract, and amaretto in a small bowl. Pour into the buttercream and beat for 2 minutes, scraping the sides at least once.

12. Spoon about ½ cup of frosting on top and spread it evenly with a flat metal spatula.Spread a thick layer of frosting over the side, working from the bottom up to the top. Frost the top by placing a mound of icing and spreading it to the side. You can decorate the cake with the remaining frosting as you wish.

As you can see I didn’t do the icing this time around. I have done it previously and it is indeed delicious. I used Kahlua instead of Amaretto but I believe Amaretto gives it a nice almond flavour to it.

This  Mocha cake… I’m just going to call it a Mocha Chiffon Cake is beautifully soft. I put it only for roughly 30/35 minutes, just done and it is as moist as ever. If you’re a fan of Chiffon Cakes, and want a slight coffee hit. This is for you! I think if you try the Gourmeted way, you may still find success, it’s just that I used a hand mixer on my previous two attempts. My planetary stand mixer works wonders with egg whites and is excellent in producing stiff peaks so that could be the reason why I found success on my third attempt.

This is slightly smaller than my Orange and Pandan Chiffon Cakes, as it only uses 6 eggs, but it’s still quite nice as you can see. It’s just a tad shorter. I might try a Black Sesame Chiffon Cake sometime because I seriously can’t get enough of Black Sesame.